Many people consider Chromebooks to be the sleeker, quicker, and even simpler cousin of the traditional laptop. Unlike a Mac or Windows system, a Chromebook mostly relies heavily on the internet for everyday tasks.

Since they’re also typically less expensive, you might be wondering how a Chromebook compares to a regular laptop, including the best laptops around. Are they a waste of money or an affordable diamond in the rough? Let’s find out.

What is a Chromebook?

When Chromebooks first appeared in 2011, they were lightweight, budget laptops based on Google’s new Chrome OS platform. These laptops mainly relied on cloud-based applications rather than traditional software. Over the years, their more affordable nature has changed, but the value is still at the heart of what a Chromebook offers.

Acer, Asus, HP, Dell, Lenovo, and Samsung sell Chromebooks in various sizes ranging from the ultrabook-type design to 2-in-1 laptops to the traditional clamshell.

The cheaper models tend to be larger and less powerful than the slimmer, sleeker premium models. These lower-end Chromebooks are most often seen in schools or as first-time personal laptops. Higher-end Chromebooks like Google’s own Pixelbook Go feature premium aluminum bodies, fast Intel Core processors, and, in some cases, 4K and OLED screens — the latter of which you’ll find on the Lenovo IdeaPad Duet 5 Chromebook, the first detachable tablet with an OLED display.

Although you can’t buy a $2,000 Chromebook like you can a Windows 10 laptop or MacBook, there is now a wide range of options depending on your needs.

What can a Chromebook do? 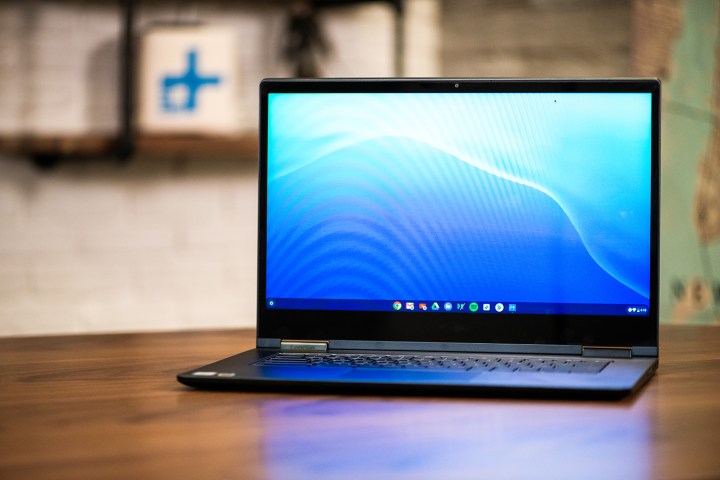 Chromebooks ship with their own operating system called Chrome OS, which is based on Linux and uses the Chrome browser as an interface. It has basic computing elements, such as a file manager and an app launcher, but most of what you use are web-based apps that require no downloading.

That might sound limiting at first, but many popular apps already offer web-based versions like Spotify, Netflix, Slack, and Evernote. Due to the prevalence of web applications, many people spend most of their time in a web browser anyway. If your typical workflow resembles this scenario, transitioning to a Chromebook will be relatively smooth. Just connect to Wi-Fi and proceed with your browsing as normal.

However, with the addition of the Google Play Store, you can also download Android apps to fill in any software gaps. Their implementation in a laptop setting might be a little funky in some cases — some expand full-screen while others remain locked in smartphone screen mode — but Android apps are available if you really need them.

Chromebooks also support Linux software. If you absolutely need desktop applications, setting up Linux is certainly an option. There are Linux versions of Audacity, Firefox, GIMP, OBS Studio, Steam, VirtualBox, and many more, but your favorite application may not offer a Linux-based variant. Check the developer’s website first before ruling out a Chromebook.

Finally, if you’re a gamer, there are plenty of options, but you’re also limited. For example, your best bet is to install Android games or subscribe to Google’s new Stadia streaming service. Installing Steam on a Chromebook is doable, but the typical low-end hardware and minimal storage will limit what you can download and play.

What can’t a Chromebook do?

The limitations of Chrome OS mean you can’t install some important software that you might otherwise need. Some notable examples include certain Adobe applications or any kind of proprietary software that’s restricted to Windows or Mac OS. If you rely on similar applications, you’ll either need to find a Linux-based alternative or avoid Chromebooks altogether.

Limitations also extend to performance in general. Chromebooks do tend to run fast, but typically that’s due to the lightweight nature of Chrome OS — it’s not service-heavy in the background like Windows. However, in some cases, you’ll be limited by the components inside. Lower-end Chromebooks tend to use older or low-end processors that can’t compete with what you get in the Windows and Mac space, especially in terms of multitasking. Then again, if you’re looking at spending $200, a Chromebook is a far better option.

On the higher end, there are options like the HP Chromebook x2 11 or the HP Chromebook x360 14c, and you’ll find familiar processors like quad-core/eight-thread 11th-generation Intel Core CPUs and even more exotic options like Qualcomm’s Snapdragon 7c — Chromebooks tend to fly with these faster options, get phenomenal battery life, or both. While you still can’t get the absolute fastest CPUs in Chromebooks, you don’t need them to keep up with Windows and Mac OS.

Most Chromebooks connect to the internet using Wi-Fi, though some higher-priced models offer cellular connectivity. If you can’t find a signal, there are workarounds for plenty of routine tasks — don’t let the heavy reliance on Chrome fool you.

For instance, you can still compose and read emails with Gmail Offline and work on documents offline with Google Drive. The offline apps will automatically save your work and sync back up with the online services when your Chromebook reconnects. Even more, you can download and play many Android games offline, too.

Who are Chromebooks for?

Chromebooks are designed with a few specific people in mind. At the forefront are students, as school administrations tend to favor Chromebooks due to their security benefits, sturdy build quality, and software limitations. That means you’ll find cheap Chromebooks in public schools across the country.

Chromebooks go beyond just cheap, plastic laptops for kids. There are also higher-end options for professionals and college students. Because they tend to be lightweight with long battery life, they are great options for people who need to take their work on the go, whether that’s from class to class or on long flights. Some of these include the business-oriented HP Elite Chromebook C1030 and the Asus Chromebook Flip C536.

There are certainly those same options in the Windows 10 laptop world. However, in the cheaper price range, Chromebooks can sometimes provide a better value. For example, approximately $500 is where Chromebooks thrive, but Windows 10 laptops at this price tend to get bogged down with a thick chassis and clunky performance.

How much do Chromebooks cost?

Despite how expensive Chromebooks become, they are still a more inexpensive option than most other brands. For instance, you could buy more than one Chromebook and still have some remaining funds rather than purchasing only one Microsoft laptop for a hefty $3,100.

Lenovo’s Chromebook Flex 5 comes in at just $425, for example. For $225, you can buy a well-known and loved Samsung Chromebook 4+ model. Chromebooks are so widespread because of their affordability, which makes them accessible to a wider customer base.

A Chromebook’s features will never be able to compare with more expensive laptops, but they perform just about every task you’d need them to do. They are dependable, trustworthy products that meet spontaneous, budget-friendly needs and desires. Their simplistic design also makes them astonishingly user-friendly, which is always a great thing, as many people are technologically challenged and may not be entirely comfortable when they have to work with laptops or computers.

How does the hardware compare to a laptop?

Among the most expensive Chromebooks you can buy is HP’s Elite Chromebook C1030, which starts at $1,624. It represents the high end not only in premium materials and build quality but also in performance.

Overall, you’ll find Chromebooks ranging from 11-inch 2-in-1s up to 15-inch options for additional screen real estate. HD resolution is the standard, while Full HD, touchscreen, and 4K options are becoming more common. Intel Celeron processors are a popular choice for today’s Chromebooks — typically, dual-core versions that rarely rise above the 2.0GHz mark — although you’ll find Core i5 and i7 chips as the prices climb.

Most Chromebooks offer 2GB to 4GB of RAM, which is enough for average laptop tasks but low compared to traditional laptop models that regularly offer 8GB or 16GB of RAM. As for storage, Chromebooks don’t have large disk drives, as they depend on the internet for most data purposes. Storage can usually be augmented with an SD card or a USB drive if necessary.

For ports, most Chromebooks are largely comparable to laptops, though fewer in number. USB-A, USB-C, and headphone jacks are common connections.

Most Chromebooks have better battery life than the typical laptop. Although about 10 hours is most common, newer models are more likely to have 12-hour battery life depending on the workflow. Windows 10 laptops are slowly closing the gap, but on average, Chromebooks last longer.

The truly high-end part of the laptop range, however, doesn’t include Chromebooks. You won’t find Intel 12th-gen, AMD Ryzen 5000, or Apple M1 processors like you get on a laptop like the MacBook Pro 16, Razer Blade 17, or Dell XPS 15. These content-creation machines and gaming laptops will outclass any Chromebook in terms of performance.

Finally, Chrome OS tablets such as HP’s Chromebook X2 11 are available, but we wouldn’t recommend those without a keyboard.

Should you buy a Chromebook?

First, ask yourself this question: Why do I need a notebook? Dig deep and consider what you require from a mobile PC.

If you’re looking for a laptop that can handle high-level gaming, crystal-clear 4K video editing, or even professional digital art programs, then a Chromebook probably isn’t the right pick for you.

While you can install Linux-based alternatives to upgrade your system, the underlying hardware in most Chromebooks is simply underwhelming compared to alternatives. Android apps do a decent job of filling in many of the holes that Chrome OS native apps can’t, but the Windows and MacOS software environments are simply more expansive and fleshed out.

Chromebooks suffer from limited storage space, which is another concession users will need to consider. Most Chromebooks only offer 32GB to 64GB of storage space, about half that of their Windows and Macbook counterparts (which start at 128GB). To get around the low storage issue, you’ll need to purchase a premium model like the Galaxy Chromebook with 256GB of storage.

Overall, Chromebooks are excellent for everyday use, especially for email, social media, and word processing. They’re an affordable alternative to higher-priced machines, but the typical web-based configurations seen across most Chromebooks aren’t meant to drive heavy desktop applications, making them perfect for basic projects. They just aren’t as capable as many Windows laptops and Apple MacBooks because they focus on a different market.

The low price, then, is the top reason why Chromebooks are a popular choice, particularly for students who don’t need a high-performing laptop.

Today’s tech news, curated and condensed for your inbox

This email address is currently on file. If you are not receiving newsletters, please check your spam folder.