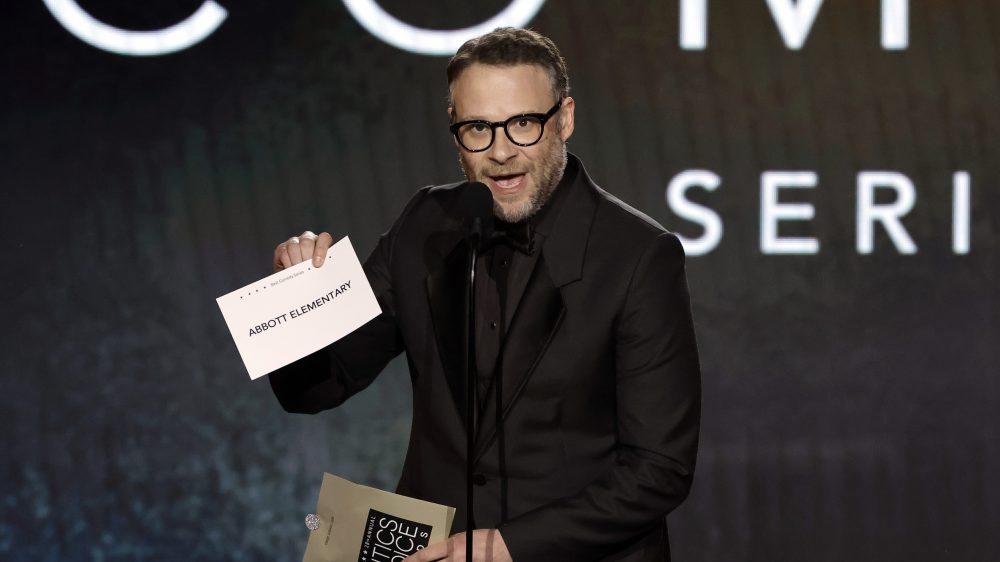 Critics Choice Awards presenter Seth Rogen took direct aim at the network home of the awards show during his moment at the mic, roasting the CW for its lack of contenders in the TV race.

Rogen reacted strongly to the show’s unusual format in the first hour, presenting the male and female winners in key acting categories at the same time. For example, Giancarlo Esposito won supporting actor in a drama for his work in AMC’s “Better Call Saul” and Jennifer Coolidge got the nod for supporting actress for HBO’s “The White Lotus,” and both performers came up to the stage at the same time to give speeches one after the other

When he went up to present, Rogen commented on the bizarre flow.

“That was weird,” he told the industry crowd Sunday night at the Fairmont Century Plaza. “Why do they do that? Are we crunched for time? Get another hour — it can’t be that expensive,” Rogen said in between giggles.

“You know how I know that? This show airs at 4 p.m. on the CW. That cannot be a pricey timeslot from my understanding of how this all works,” he said, referring to the fact that the live kudocast has to air in the late afternoon West Coast time in order to start at 7 p.m. in East Coast markets.

“I’m not saying the CW is bad. What I will say is that it is the one network to receive zero Critics Choice nominations,” Rogen said. “You are saying it’s bad! We’re on your least favorite network. How did that happen?”

Rogen’s free-flowing riff then veered into the skewering the trend of award show telecasts that honor other kudocasts, such as the Emmy Awards presenting trophies to the producers of the Academy Awards. Rogen suggested that Critics Choice voters can spare themselves and the CW the embarrassment in the future.

“Nominate yourselves next time. You’ll have one,” Rogen explained as the crowd laughed. “No one will think it’s weird. They’ll think it’s fine.”

From there, Rogen appeared to ad-lib even further before shifting back to the business of handing out awards.

“If you were a normal viewer of the CW, this is a startling image to be seeing on your television right now,” Rogen said. “I might be the first Jew on the CW in history. Soak it in.”