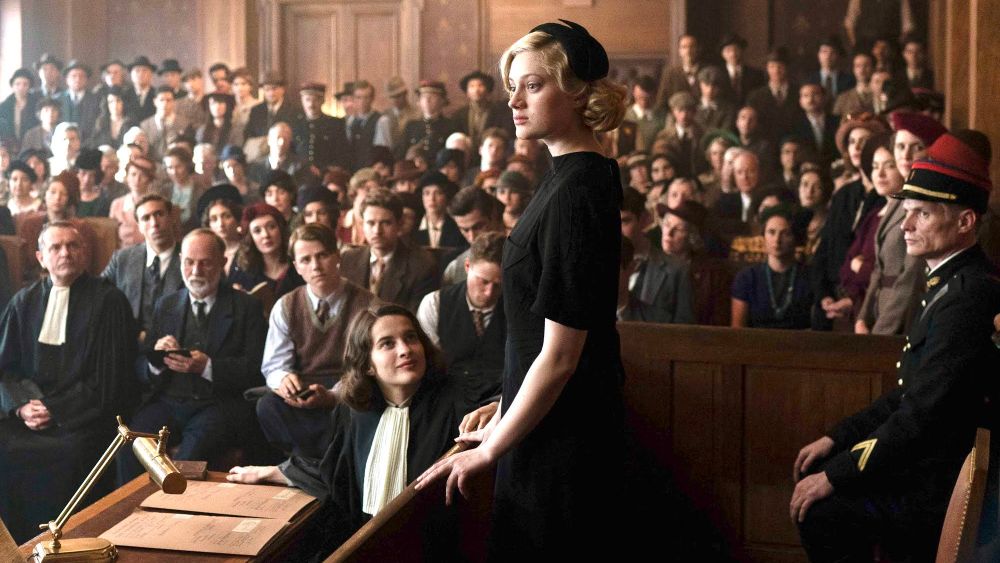 After “Peter van Kant,” French director François Ozon goes many shades lighter to revisit gender and power dynamics in “The Crime Is Mine,” a lush ensemble comedy set in 1930s Paris.

Loosely inspired by the 1934 play by Georges Berr and Louis Verneuil, the film tells the story of Madeleine, a pretty, young and penniless actress, who is accused of murdering a famous producer. Helped by her best friend Pauline, a jobless lawyer, she is acquitted on the grounds of self-defense and becomes a star, as well as a feminist icon.

“The Crime Is Mine,” produced by Mandarin Cinema, brings together a sprawling cast, led by a pair of up-and-coming actors, Nadia Tereszkiewicz (“Forever Young”) and Rebecca Marder (“Simone”), alongside Isabelle Huppert, Fabrice Luchini, André Dussolier, Dany Boon and Félix Lefebvre. The movie has been sold by Playtime in many key markets.

Ozon discussed his new film with Variety following its world premiere on the opening night of the Unifrance Rendez-Vous in Paris earlier this week.

Your film is like a fairy tale, a cinderella story, isn’t it?

I had the idea to make this film at a time when everything was so depressing during the lockdown. Of course everything is still going badly with the war in Ukraine, the recession, global warming… But at that moment I just had the desire to return to comedy, to make something light while tackling things that concern us today, meaning the power dynamics and the status of women. Along the lines of “8 Women” and “Potiche,” two other movies I made that were also about women. In “8 Women” it was about the renouncing of the patriarchy, and in “Potiche,” it’s about the rise of the matriarchy, charting a woman’s rise in politics. It was tied to the presidential campaign of Ségolène Royal in France at the time. “The Crime Is Mine” is ultimately about the triumph of sorority. Obviously it echoes what’s been happening in the last few years in the western world with a new wave of feminism.

This theme of power dynamics in the arts was also at the core of your previous movie “Peter van Kant.”

It’s something that concerns me because when you are a director, you are in a position of power, so it makes you think about your responsabilities. A lot of people in the film industry are questioning their own stances, ways of working. And it seemed that in order to tackle all these topics with some freshness, I needed to distance myself slightly, which is why it was key to set this story in the 1930s. It turns out there were things going on in France during that era with a string of murders committed by women. The movie even mentions the true story of Violette Nozière, who was the subject of a film by Claude Chabrol starring Isabelle Huppert, and there was also the Papin sisters, who inspired Jean Genet for his play “Les bonnes.” What’s compelling is to look at these female criminals with the historical prism that we have today and tie them with the condition of women at the time.

The dialogues sound so contemporary that I assumed there was some anachronism in your film.

It’s not at all anachronic. Apart from a few expressions, what’s said in the film could have been said back then. I think the word “sorority” didn’t exist. But there was still the suffragettes because women didn’t have the right to vote in France in the 1930s, they only obtained it in 1945. The patriarchy was triumphing but many women fought it to bring about change.

It’s very enjoyable – and rare – to see a French movie that ends well.

Yes, there’s something joyful; it ends with a play in the tradition of Jean Renoir. It’s also a playful reference to “The Last Metro” by François Truffaut, as we go from reality to theater. Since there’s a “mise en abyme” with an actress playing an actress, the film had to end with a play.

The true reference for Isabelle Huppert’s character is Sarah Bernhardt, a very famous French actress of that era, an actress who starred in silent films, who was mostly a stage actress. With Pascaline Chavanne, the costume designer, we had fun highlighting the contrast between the two young girls (Tereszkiewicz and Marder), who are very modern and dress very 1930s style, and Huppert’s character, Odette Chaumette, who is still stuck at the start of the century. She dresses with outfits from the 1910s!

Would you say your film is like a love letter to cinema?

It pays tribute to the wittiness of American screwball comedies from the 1930s. I had in mind movies by Ernst Lubitsch and Frank Capra, which were fast-paced with lots of dialogues. I love the brisk tempo of these American comedies from the 1930s; it was for me the golden age of classical comedies. It turns out that many of these comedies at the time were taking place in Paris. Because Paris was considered as a city where social mores were lighter. Producers believed that American audiences would accept more easily these stories about treason and infidelity if they were taking place in France and in Paris. This has not changed with time as today we have “Emily in Paris”!

But it’s so lavishing shot, like an idealized view of Paris, especially those scenes with the Parisian rooftops.

It was important for me to have a realistic reconstruction of Paris from the 1930s. But at the same time, we also created a stylized Paris because this Paris from the 1930s no longer exists so we had to work with archives. And we also had in mind the Paris of the 1930s viewed by the Americans, as in the film “Victor Victoria” by Blake Edwards, in which it’s a bit of an idealized Paris.

This film looks expensive. Would you say it’s your biggest budgeted film so far?

I’ve never done blockbusters, so it’s reasonably budgeted. But it was important that we had this lush quality, the decors and costumes because this is a film meant to be truly enjoyable. But ultimately this film relies on the actors.

The ensemble cast is so wonderful, especially the young female duo, Rebecca Marder and Nadia Tereszkiewicz ,who are actually in Unifrance’s 10 Talents to Watch for 2023.

Yes, and when I chose them I had not yet seen the movies they had done. I did a long casting to find the two best actresses who could form this special bond with one another. Because the film needed this chemistry between those two girls. And as soon as I saw Nadia and Rebecca I knew that it was going to work. I like the idea to make a film with two actresses who weren’t well known and surround them with famous French actors. To reflect their on-screen situation, in which they are surrounded by white males over 50 who try to seduce them, and they pull it off extremely well thanks to their intelligence and resourcefulness.

It’s so great to see Dany Boon in one of your films! He’s best known for more mainstream comedies.

I love to mix up actors who are from different background  and I’m not snooty toward commercial movies. For “The Crime Is Mine,” I needed some very, very good actors because there is a lot of dialogue, it’s tightly paced and it’s a comedy. I was delighted to work with Dany for the first time. He’s a very good actor. And since everybody knows his Northern French accent, it will be particularly funny for the French audiences to hear him with a Marseilles accent.

How was it to reunite with Isabelle Huppert after all these years?

Isabelle is one of my favorite actresses. We had done “8 Women” together more than 20 years ago and what I love about Isabelle is that she has a lot of humor, about herself, about her career. She joyfully grabbed this role and I think she had a lot of fun with it!

Did you let her improvise at all?

The text was very important on “The Crime Is Mine” because we had to use the typical French vocabulary of the 1930s, but the text bolstered the actors, especially for Isabelle’s character. In the play that inspired my film (by Georges Berr and Louis Verneuil), Chaumette was a man. I turned it into a woman but it amused me to keep the lines of the man. They sound a bit vulgar in Isabelle’s mouth but at the time she is so naturally feminine that it creates something unique and funny.

Are you already working on your next film? You’re the most prolific director we have in France.

I’m not working on anything right now besides promoting this film. I’ve been making just one film per year for the last 20 years, and I realize it’s a real chance for me to have this opportunity to work with so much freedom and pleasure. In my opinion, France remains the best place for a director to keep control over his creative work.