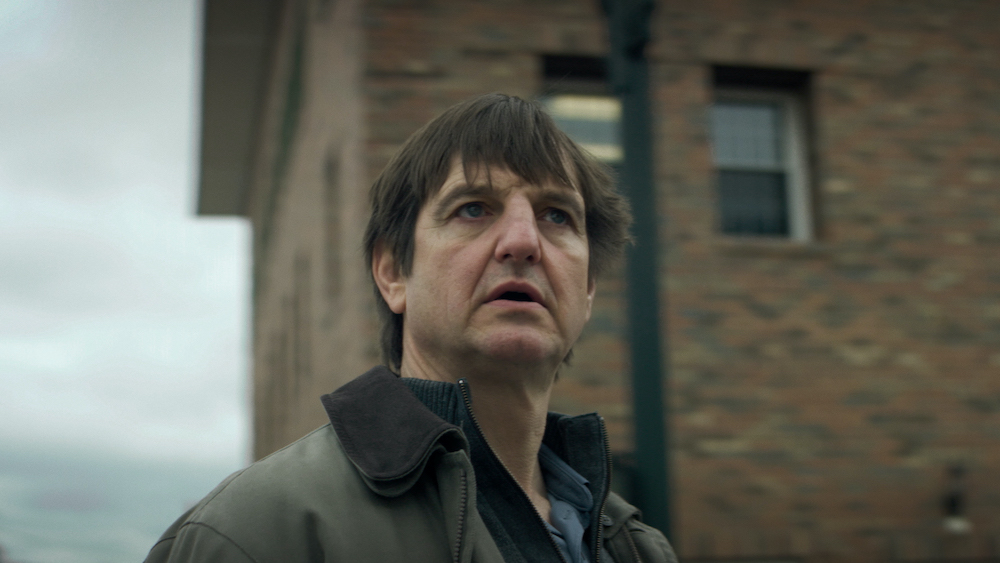 Although there is much to admire in “On Sacred Ground,” the first dramatic feature by environmental activist documentarians Josh and Rebecca Tickell, this technically polished indie effort is overall more admirable in its intent than compelling in its narrative. And there’s really no way of getting around the fact that many viewers will be put off by the abundance of “white savior melodrama” in a movie putatively focused on 2016 protests by Native Americans and their allies against construction of the Dakota Access Pipeline.

To be sure, it can be argued that telling the story through a non-Indigenous protagonist’s point of view is an efficient way to expose a wider audience to pressing social issues about land use, water rights and cultural imperialism as the lead character gets his eyes opened and his conscience stoked and blah, blah, blah. Trouble is, the movie places so much emphasis in so many scenes on the professional, domestic and psychological crises of Dan McKinney (William Mapother), the freelance reporter assigned by a conservative Houston newspaper to cover events at the Standing Rock Indian Reservation in North and South Dakota, that he inevitably overshadows everything and everyone else on screen. Sound familiar?

McKinney is hand-picked by the editor of the fictional Houston Daily (Frances Fisher) as the perfect journalist to provide the “right perspective” while covering the problematical protesters threatening to impede progress of the pipeline because (a) he’s a Republican, (b) his credit rating is below sea level and (c) his very pregnant wife (Amy Smart) is about to give birth to the couple’s first child. (Must admit, this had me thinking: Can editors really learn that much about a writer through a casual online search? Yikes.)

Sure enough, McKinney is so desperate for a paycheck, he expresses only mild concern when he’s flown to Standing Rock on a private plane alongside Elliott Baker (David Arquette), a smooth-talking fixer representing oil company interests. Baker wants to ensure McKinney will tell his readers the truth about how unruly Native people and outside agitators are undermining a project designed to employ hundreds of workers and transport “500,000 gallons of crude oil a day.” When he’s not immobilized by jarring PTSD flashbacks to his wartime experiences as a combat journalist in Iraq, McKinney more or less performs on cue.

Indeed, his editor is so pleased with McKinney’s work that she sends him back to Standing Rock, to ingratiate himself with the protestors while pretending to be, if not an ardent supporter, then an objective journalist, and to expose them as threats to the American Way of Life. Not surprisingly, something else happens.

The filmmakers frequently reflect their roots as documentarians, and not only in the lengthy scene-setting prologue that flashes facts and figures on news footage. That same bombastic visual signaling is used later during a tense lunch scene in which an overbearing Baker and a newly enlightened McKinney argue about, among other things, the potential for the pipeline to pollute tribal water supplies. Here and elsewhere, “On Sacred Ground” comes awfully close to erasing the line between igniting dramatic tension and preaching to the choir.

Supporting players cast as Native American protestors are impressive across the board, with particularly memorable contributions coming from Kerry Knuppe as a brassy activist who’s rightly skeptical of McKinney; Irene Bedard as a protest organizer whose dubiousness about the reporter curdles into contempt; and David Midthunder as a protestor who’s appreciably more accepting of McKinney until he has good reason not to be. (Credit Midthunder for powering one of the movie’s more emotionally impactful moments, when he brusquely informs the reporter that it’s time to face the music.)

But even these fine actors are hard-pressed not to come across as window dressing as Mapother’s potently implosive performance is spotlighted and underscored, and “On Sacred Ground” places its prime emphasis on his character’s redemption. The result is a movie that is not merely disappointingly uneven, but irredeemably unbalanced.