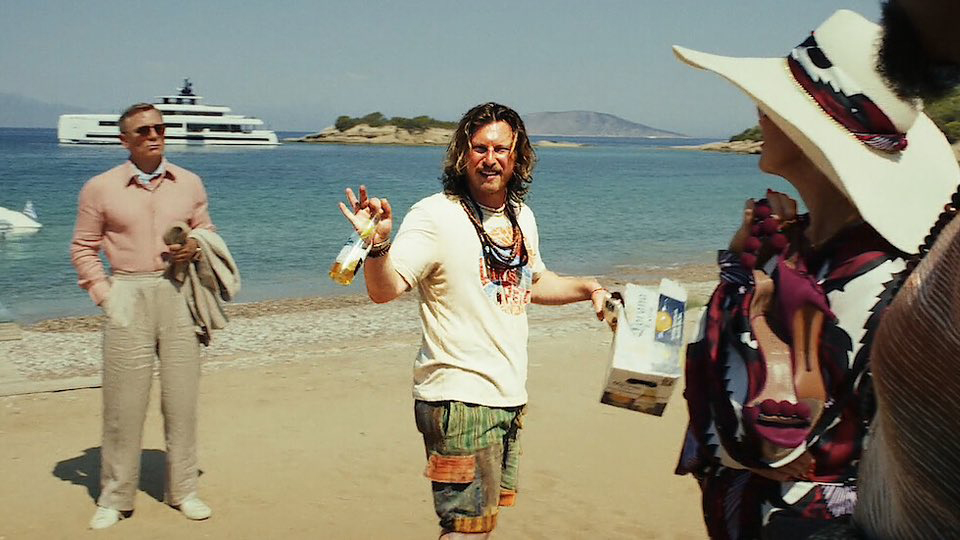 In a film featuring a (in some cases literal) murderer’s row of movie-star performances, the “Glass Onion: A Knives Out Mystery” character that has received the most ink since its Netflix premiere on December 23 is Derol, the Corona-toting slacker who briefly appears in only a handful of scenes — but steals every one of them. Played by Noah Segan, who has appeared in every one of Rian Johnson’s films to date, Derol has taken on a life of his own, becoming a favorite even on the periphery of the murder-mystery action, and perhaps because of that, a meme.

As unimportant as the character may be to the machinery of the film’s tightly-wound plotting, Johnson says he gained significance with each scene he wrote Derol into. “[Derol] started just kind of as a comic runner throughout the whole thing,” says Johnson. “And then weirdly, as comic runners tend to do it, it kind of became more and more oddly important.” Taking inspiration from “the Kato Kaelins of the world,” hangers-on who seem not quite to be part of rich or important people’s entourages but are always just kind of around, he says the character creates a fun bit of unpredictability that keeps the audience off balance. “I think actually having this bit of chaos in the middle of such a tightly wound story ended up being quite important.”

After a series of collaborations that go back to Johnson’s debut film “Brick,” the filmmaker explains there’s another reason he found himself adding more Derol to his movie: “I’m also always looking for a reason to have one of my best friends, Noah Segan, on set, and it seemed like it would be a pretty fun way to do it.”

Even if Segan can predict that he’ll get a character to play in Johnson’s film, he says he never expects it — in this case, after playing the highly visible Trooper Wagner in “Knives Out.” “There are no expectations between us other than that we love to be together and we love to be together on set,” Segan says. “There’s always this hope, you know, hey, what can I do? But I tend to not have a clear picture of what I’m doing with with Rian until I read a script.”

“With ‘Glass Onion,’ Derol was obvious in that when I read it, I was like, oh, now we’re getting a little meta here,” referencing not just the relationship between his character and eccentric billionaire Miles Bron (Edward Norton), but him and Johnson.

While the character was played by one of the filmmaker’s oldest friends, he was inspired by — and named after — another: Derol Frye. A pal of Johnson’s since junior high, Frye lent his last name to Joseph Gordon-Levitt’s character in “Brick,” Brendan Frye. The graphic designer and Santa Cruz resident says he was excited when Rian indicated what he might borrow for the “Knives Out” sequel.

“Back in April 2021, we were having a barbecue at my folks’ house and he took a picture of my shirt because I’m in a band called Little Petie & the Mean Old Men, and I had this one-off shirt [of the band] that I made,” Frye remembers. “He was like, ‘I’m going to make a character in ‘Glass Onion’ called Derol and Little Petie & the Mean Old Men’s going to be his favorite band.” Given Segan’s pedigree as the charmingly goofy murder mystery superfan Trooper Wagner in “Knives Out,” however, Frye admits he was initially concerned about the public reaction to his on-screen proxy. “I found out Noah was going to play him. And I’m like, ‘Wait, you’re going to make this dude a dork?”

Frye says Johnson reassured him that the character was “going to be the coolest guy in the movie,” although he acknowledges that he shares — or at least shared — a few qualities with the fictional Derol. “Whenever he had a movie come out, we’d all go see them. Because I’m up in Santa Cruz, I’d ride my motorcycle down just to [attend], because any excuse to ride. And then I’d be like, ‘All right dude, where do you live? I’m crashing on your couch.’ So maybe that’s part of it. And when we were kids, I had long hair, was kind of a hippie.”

“These days I also always drink Mexican beer, so that could be part of it,” Frye adds, clarifying that the film diverges from one crucial detail of his own consumption habits. “My beer of choice is Tecate, so it’s kind of funny that Noah was cruising around with Coronas.”

Johnson did admit that the hair was inspired heavily by Segan’s “Michael Landon-esque” locks from during the pandemic, but like the charismatic detective navigating these mysteries, he deliberately never came up with a more detailed back story to explain Derol’s behavior, much less exactly how he came to live in a guest room on Bron’s private island. “There’s something fun for me in creating a character and never figuring out where he came from.”

Meanwhile, Segan says he hasn’t met the real Derol, but borrowed from what he’d heard about him from Johnson. “Derol, from what I know, is a really fun-loving, entertaining life of the party kind of dude,” Segan says. “Very much I think it made sense that Rian would name this character with this sort of influence and vibe that named after this guy who is sort of beloved old friend of Rian’s.”

Although he still harbored some reservations about the character after attending the Los Angeles premiere, Frye says that he subsequently recognized how right Johnson was about Derol’s presence in the film. “I saw the movie again when it came out in theaters for that week, and I texted him back and I’m like, ‘You’re right. He was the coolest guy in the movie.’ After watching it the second time, I was like, ‘he definitely stole the show’.”

After successfully transforming his longtime star for “Glass Onion,” Johnson confesses he isn’t yet sure how he’ll reimagine Segan for their next collaboration. “That’s the hard work that lies ahead of me,” he says. Though he’s eager to work with Johnson again (and just did on the forthcoming Peacock series “Poker Face”), Segan confirms that they’ve had no discussions yet on what role he might play in the next film. “I really don’t know where he is at in the process,” says Segan. “And that’s because his process is so incredibly cerebral. He makes it look so easy, because it’s all happening in his head.”

“Him sitting down to actually type out a screenplay is really like, the last step,” Segan continues. “So one day he’ll tell you, ‘Hey, I sat down to start writing,’ and then weeks later, there’s a script, and it’s fucking great.”

Conversely, even with another Benoit Blanc mystery on the horizon, Frye isn’t optimistic that Johnson will again borrow from his life for another character. “My middle name is ‘Dea,’ but I don’t think he’ll ever probably use that,” he says.